While researching some links for my previous post I came across this Wikipedia entry about an abandoned tube station. I always thought disused Underground stations were a movie “myth”, but it turns out there are quite a few of them! [Wikipedia]

All the travelling I did last year gave me a new determination to explore more of my own country, and especially London as when you live in a place it is very easy to dismiss tourists and completely miss the reasons they have come to visit! Some fun things I have done recently:

Being a non-technical publication, the BBC News website has an insightful look (and live demos) at the new user interface in the forthcoming version of Microsoft Office. (The short version for the video-challenged amongst you is that the traditional menus are out, replaced with “ribbons” of buttons which appear to be context-sensitive toolbars.)
END_OF_DOCUMENT_TOKEN_TO_BE_REPLACED

There is hopefully a special part of hell reserved for those that inflict stupidly bad design decisions upon us. Take, for example, the decision by the makers of the machines that allow one to top up their oyster card to require the process to be terminated by the user presenting their card to the machine one final time. This doesn’t sound particularly onerous, but clearly some users had difficultly understanding the request so the screen features a very large red arrow pointing down towards the card reading widget which is to the right of the screen. What a pity the “Cancel” button, of the same colour as the arrow, is to be found in the bottom right-hand corner of the screen, just a few millimetres from the tip of the arrow…

On the subject of TfL ticket machines, the exorbitant new cash fare structure means the ticket machines that only accept coins are now practically unused: few people carry sufficient coins for even the £3 single fare. Correspondingly, the small number of more useful tickets machines that accept cards and notes and allow one to charge an oyster card always seem to have very large queues….

Nokia mobile telephones have a reputation for being the best on the market, but for a long time they didn’t produce a phone with all the features (tri-band, bluetooth and GPRS) that I required and so I had bought (Sony-)Ericsson phones. Recently I noticed that the Nokia 6230 does have all these features and given Nokia’s aforementioned reputation, I decided to go with the 6230i instead of another Sony-Ericsson.

So, after my first week with the phone, is Nokia’s reputation deserved? As usual when switching brands some things are better, some things are worse, and some things which are just different.
END_OF_DOCUMENT_TOKEN_TO_BE_REPLACED

There’s been a lot of headlines about Web 2.0 recently, and at least one person has asked me: “What does all this 2.0 stuff mean exactly?”. With the dot com “bust” still a recent memory, a lot of people have proclaimed it more Internet-hype—and there is no denying the 2.0 moniker is pure marketing—but if the web becomes so ubiquitous people take it for granted, isn’t a little reminder of how much better things are now than they were in say, 1999, a good thing?

Anyway, here’s something which I think sums up why the web deserves a large bump in version number. During the Apple product announcement yesterday, practically every Mac-related website was swamped with traffic, yet I was able to watch a minute-by-minute summary at http://www.macrumorslive.com/ (sadly disabled after the event so you can’t see just how cool it was). Sure, webpages that automatically refresh themselves at a set time interval have been around since web 1.0, but this page didn’t refresh (the whole content), it updated with only the new information: no annoying flicker as the whole page changes, no wondering whether the server will be completely overloaded during this refresh so you’ll have to manually interveve, and it even had a little ticking clocking showing you how long until the next refresh so you knew how much time you could dare to avert your eyes for! It’s a shame there isn’t a demo available, but for the techies amongst you, there are some details of how it works.

The January Sales are a wonderful thing: yesterday I picked up a Ferguson R116D DAB digital radio for half price at Dixons. 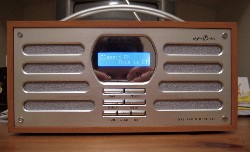 I’ve been considering a digital radio for a some time. Some people claim the quality is lower than FM and punters would be better off listening via the Internet, or using a Freeview digital television box, but since a good portion of the stations to which I listen regularly (e.g. Virgin and Radio 5) are broadcast on AM-only, it seemed to make sense. I also really like good old-fashioned radio — I can operate it even before I’ve had coffee in the morning, and without the distractions associated with turning on my computer!

So far, I am really pleased with it. There are a lot of digital stations available, even in our basement, and overall the quality of the stations we like is pretty good but bizarrely many of the rubbishy commercial ones do seem to broadcast in 96kbps mono — come on people, this is the 21st century!!!

While audiophiles criticise DAB for the poor audio quality of many stations, for me this is pretty moot since this is a cheap set with only two 1 watt speakers (but it does have line-out which is missing from many cheaper sets and therefore one of the reasons I chose this one). However, I do think DAB has a number of advantages over FM, namely tuning into stations is considerably easier, and the digital display gives all sorts of extra information such as the currently playing song.

Another advantage of this model over many others in its class is that it allows up to 10 DAB and 10 FM stations to be stored as presets. While tuning is easier than FM, having only 4 presets for each of DAB and FM would have quickly led to an argument in this household!

Not a major problem, but after a few weeks of usage I’ve decided the lack of visual feedback on the volume control is rather annoying.