San Francisco’s climate is ideal for outdoor-activities, warm and pleasant, not baking and burning. While the city itself is too busy and hilly to explore lazily by bike, the 17 mile ride from The Presidio to Tiburon is mostly flat, away from motor traffic and provides plenty of opportunities to enjoy the beautiful bay and bridge.

My abiding memory of Yosemite will be the weather. It rained as we drove into the park so we expected the views to be hidden from us and were pleasantly surprised when the low cloud made our first view of the valley more dramatic and different to the clear blue vistas found on postcards.

When we woke the next morning the rain was still pattering down on the roof of our heated canvas tent-cabin. We were recommended the Mirror Lake trail as likely to be the nicer of the standard sights given the conditions and the rain stopped long enough for us to enjoy the walk, and see the granite rock formations appear and disappear from behind the foggy clouds. By lunchtime, the temperature had dropped and the drizzle had turned to proper rain but undeterred we set off for the large torrent of water known as Yosemite Falls, not realising that that the clouds hid a second higher stage which was even more impressive. The weather had worsened to the point that we did not feel like risking our cameras and as we headed away from the falls, rain turned to sleet and we decided a few hours in the visitor centre museum and Ansel Adams gallery were not going to cause us to miss very much.

Sleet turned to snow while we were in the museum and we were very grateful when the friendly people at Camp Curry upgraded our tent-cabin from just heated to heated and insulated since the forecast was for it freeze overnight. Fortunately we survived the night and the sun arrived the next morning when we were greeted by a glistening fairytale landscape of snow-covered trees and granite pinnacles. The strong sunshine meant the snow began to melt quite soon on the trees on the valley floor, but watching it drip from the branches was picturesque in itself.

After a morning walk taking in the glorious landscapes (albeit dodging the melting ice as it fell from the higher trees!), we had an early lunch and then paid another visit to Yosemite Falls. However as we approached the cloud closed in again and around the falls there was definitely some soft wet precipitation that seemed to be more than just spray from the snow-melt fuelled torrent of water cascading down from on high, so the photographs were still taken rather hastily! Fortunately the clouds only delivered a mild hail storm and we were able to exit the Park without any weather-related problems. It may not have been pleasant at times, but the weather definitely enhanced this visit. 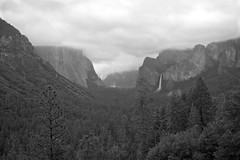 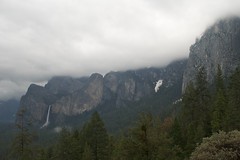 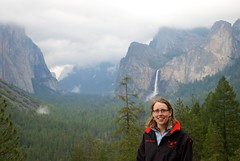 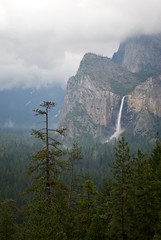 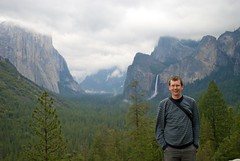 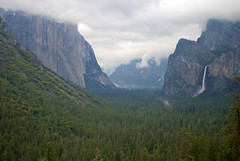 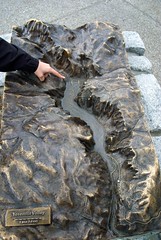 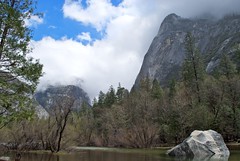 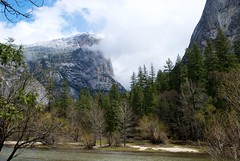 Half Dome appears from behind the cloud 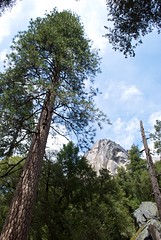 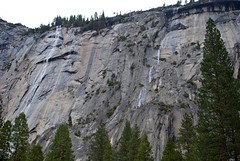 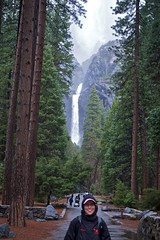 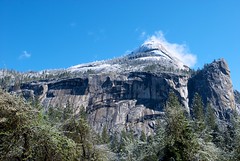 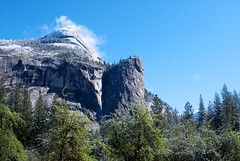 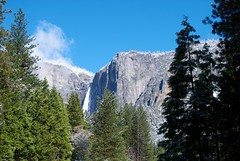 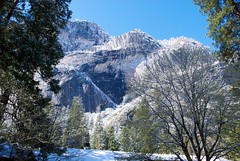 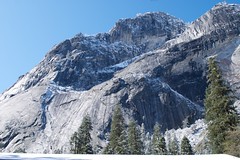 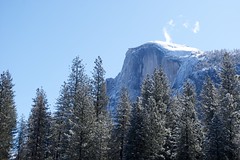 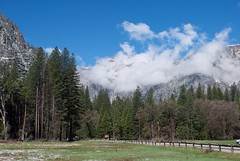 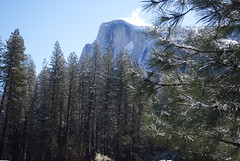 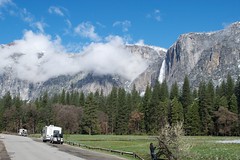 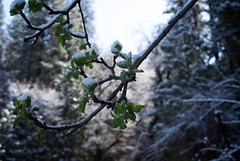 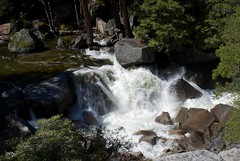 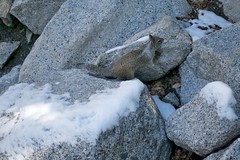 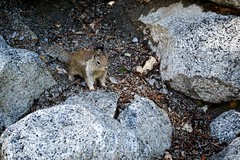 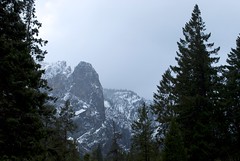 The sunshine only lasted a morning 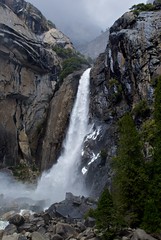 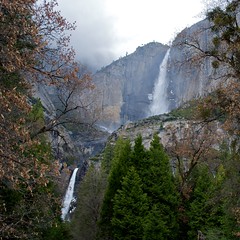 After two and a half days admiring California’s coastal scenery, it was time to turn inland and the National Parks of the Sierra Nevada. After being sent on a small detour by some wilful mis-signposting in the town of Atascadero, we drove into Sequoia National Park at dusk, as the last rays of the sun coloured the rocks a wonderful ochre shade of orange. After about 10 miles (and several thousand feet of altitude), the roadside became deep snow banks and the dashboard told me the air temperature was 43°F (~6°C)—a complete contrast from the 26°C we had been experiencing a few hours earlier. Sadly there was no time for sunset pictures though as we had to reach our lodgings before the restaurant closed and I had to suffer a dinner-starved Rosie!

The next morning was bright and sunny which caused the snow to glisten and sparkle. We set off from Wuksachi Lodge in search of a good walk to rid us of the memory of yesterday’s many hours in the car, and started with the Giant Forest of Sequoia trees and the largest (by volume) living tree on Earth, General Sherman. At 275 feet (83m), this tree isn’t even the tallest, or oldest, but its trunk continues to expand outwards each year and it (he?) is a fine example of these majestic trees. Since the snow on the trail from the car park to General Sherman was entirely compacted, we set off on a trail which was described as paved and very easy. It was only a few tens of metres before we realised that the trail was not marked apart from the paving, and that was hidden below increasingly less compacted snow. After guessing the direction wrongly once and having to hike back through ankle-deep snow, we returned to the car and went in search of a visitor centre to find out what was recommended in these conditions!

Apparently snow shoes are recommended for the trails at the moment, but since we also wanted to visit the big granite “Morro Rock”, we set off to see that before committing ourselves to snow shoe rental. While the walking trail was under snow, the (closed to traffic) road was mostly passable in hiking shoes, although the signage was so poor we took two wrong turns just 100m from the rock! The signs warned against climbing the rock if there was any snow or ice on the stairway, but the strong afternoon sun ensured we had a thrilling 400 step ascent to the 2049m elevation summit for some stunning views of a mountain range on one side and the deeper than the Grand Canyon valley on the other. The best part was that we had the rock entirely to ourselves, something there would be no hope of when the access road was open to cars in the summer!

The Big Sur is an area of outstanding natural beauty south of Monterey, California. US Highway 1 whiles and wends a course between a rugged coastline pounded by huge Pacific surf to the West, and steeply sloping hills to the East. Along the way there are a number of well maintained state parks offering short hikes to get a closer glimpse of the waves thrashing into the rocky beaches and cliffs, or on the other side of the highway, forested canyons and pretty waterfalls.

Our first stop was Point Lomos State park which featured some easy and uncrowded hiking trails to give us our first glimpse of the raw power of the Pacific. A second stop in Pfeiffer State Park took us inland through shady pine groves and spring wildflower to a gentle waterfall.

Further south, marked only by a sign saying “Narrow Road” (thanks to the Lonely Planet for clueing us up to this one!) we were able to get down to sea level and the gorgeous but wind swept Pfeiffer Beach. Big waves splashed impressively against building sized rocks near the shore, and the sand had pretty purple patterns due to the manganese garnet deposits washed down from the surrounding hills. The sun was baking but the incredible wind made it feel about as warm as a Cornish beach!

Most of the inland sections of Julia Pfeiffer Burns State Park were closed following extensive recent fire damage. However it does contain the rare sight of the pretty McWay Falls which cascades 80 feet directly onto a pristine unoccupied sandy beach (no public access to the beach was a condition of the legacy which gifted the park to the State). Many people turned around after seeing the falls, but the same trail led to a lookout point with a beautiful 270 degree vista of the coast.

We also stopped at Salmon Creek Falls, a more conventional three level drop within a forest canyon, but with a supreme location at the apex of a hairpin bend in one of the twistier sections of the road. This set of hairpins takes the road down to the coast again and follows the shoreline rather sedately, albeit with some fantastic views. The highlight of this section is undoubtedly the colony of Elephant Seals basking on the beach near Piedras Blancas: the beach is less than 50m from the highway, so viewing them is as easy as pulling into one of the spacious car parks and finding a good vantage point away from the other tourists!

There was no mobile reception at the place we stayed over the weekend but they did have a (slow) Internet connection!

In other news: I ate my own body weight in cheese for lunch at “Taco Temple”: green chillis stuffed with two types of cheese, deep fried with a side of beans, rice and more cheese…. Very tasty!