Leading up to the event, mention of the Olympics in conversation led to pessimistic discussions of two weeks enforced working from home or even “escaping” London before the city gridlocked. While road users moaned about lanes being reserved for IOC bureaucrats, official websites indicated that there would be a 30 minute wait to board trains at key underground stations.

A week into the event and everything has changed. The transport and general chaos that everyone thought inevitable has not materialised. The transport has been no busier than usual, the attendees’ tube etiquette no worse than the standard tourists, and at times it has seemed that the only delay was due to officious one way systems that continued to be enforced despite deserted passageways.

I, for one, am really glad that I did not leave town for the duration. The clutch of gold medals won by Team GB have undoubtedly helped kindle interest in the games, but there is also a great atmosphere in the city. Sports rarely heard of in Britain, such as beach volleyball, have won new converts with their party atmosphere and many nations are hosting a “hospitality house” with exhibitions, concerts and parties. You can even spot medal winners on the bus!

And what about that much vaunted legacy of the games? With so much success by both sexes in boats and on bikes, surely it is time to end the illusion that men’s football is our national game?

Photographs from day five of the Olympic tennis tournament at the All England Club in Wimbledon. We saw Victoria Azarenka and Maria Kirilenko on the practice courts in the morning. Then Roger Federer v Denis Istomin, Azarenka v Petrova, and Sabine Lisicki against Maria Sharapova from some great seats on the Number 1 court.

The grand opening of London’s new skyscraper was an excuse to put on a show… with lasers.

A letter to The Independent recently quoted the following sentence from an article about the Big Society as an example of obscure writing.

Public sector mutualisation and budgetary takeover by citizens of the state is a crucial initial phase in endowing ordinary citizens with the power to ensure that the services they run are operated in a way which combines public interest with economic efficiency and localised employee ownership building in all the gains that this model delivers.

I would not disagree that the final clause (“building in all the gains that this model delivers.”) is unnecessary and should have been pruned by a good editor, but a complex concept cannot be explain in simple terms.

Mutualisation refers to idea of collectives/co-operatives, for example, building societies. “Public sector mutualisation” is therefore makes people co-owners of the public sector changing the model from one where they are customers or consumers.

budgetary takeover by citizens is a (too) concise term for having spending allocations and priorities determined by citizens and not civil servants.

services they run refers to public sector services now co-owned by the ordinary citizen where said citizen has high level input into budgets and policy but implementation remains with the public sector.

combines public interest with economic efficiency—money is spent in line with public expectations with minimal administration costs. I think it interesting that “public interest” was chosen here instead of “public good”, but this is a post about language not politics so I will not examine that further.

Contemporary mediums with low character limits such as text messages and twitter encourage dense, terse and economic phrasing so I find it surprising that someone would complain about a sentence which is all of these things. However perhaps at 348 characters (requiring three tweets) it was the length that offended the letter-writer?

[Mostly typed one-handed due to a broken collar bone; enforced R&R at home has given me too much time to read and consider such things!]

On Wednesday I went to a fantastic gig by KT Tunstall. I had already listened to (and mostly liked) her new album via Spotify but the concert confirmed that this was music worth owning (such an outmoded concept!). Here is a short survey of a consumer’s music purchasing options as of this week:

Having enjoyed KT providing some context for the songs on the new album I also looked to see if any store would provide me with electronic sleeve notes. iTunes offers a digital version of the DVD (for the same price as Amazon charges for physical media) but no store offered any non-music extras.

Conclusion? I decided 7digital offered the best combination of convenience, durability, quality and price because physical storage space is at a premium in a flat, and good off-site backup is a significant cost.

Bermondsey Street runs south from the always busy 1 “More London” riverside but (fortunately!) few tourists seem keen to venture under the imposing railway bridge to visit. Consequently it normally has a quiet village-like atmosphere, there’s even a little park half way down which might be the Village Green.

On a sunny Saturday afternoon it was bustling (for a village!) with friends and families heading to the gastro pubs and other brunch places (including a genuine greasy spoon!).

While end of year retrospectives may seem like a good way for journalists to fill column inches during a period traditionally bereft of good new source material, I think it is healthy to be reminded of the recent past, to re-evaluate events within a wider context and a little bit of hindsight, and also marvel at how things which now seem so distant were actually recent (for example the day that London turned white).

Highlights for me in 2009 have undoubtedly been changing job, getting married and buying a flat—2010 is going to have a hard time living up to that! Holiday destinations in 2009 included San Francisco (including an amazing day of ski-ing in the sunshine in Tahoe), Gdansk and Sussex.

The three events mentioned in highlights did not leave me very much time to write about these trips here, or in fact write very much at all. There was also less need for me to write here to draw people’s attention to something: if I publish my photographs to Picasa Web then they are automatically pulled into Facebook and my friends are notified through in their new feed. The biggest change in web publishing in 2009 was not actually about the publication but consumption: twitter and the aforementioned Facebook news stream have provided non-techies with an interface to a facility geeks have had for years with a feed reader.

Traditionally, at this point, a review article should turn towards predictions for the new year. I do not have a prediction but a hope, that having to register individually for websites will become to be regarded as outmoded and unfashionable as blinking text. Not for important (or even semi-important) websites, but for “disposable” logins of low importance, privacy and security, I should really like to avoid having to generate a user/password combination and go through the rigamarole of “verification”. Do I ask too much?

The sheer convenience of being able to upload directly from iPhoto means that many of my photographs from 2009 have gone to Picasa web albums instead of this website. However during a recent upload I noticed that during the process the photographs were being overly sharpened which had the effect of creating ugly artefacts on buildings with intricate decoration (e.g. churches). The odd thing is that if you upload jpgs one at a time via the web interface, this did not happen.

Looking back to some photographs from earlier in the year you can see this else where. For example compare this photo of Rosie at the top of a cold and windy church tower to the Picasa version below.

Picasa was convenient but perhaps it is time to return to hosting my own photographs?

India Knight wrote in today’s Sunday Times that she could not understand the modern penchant for recording and posting one’s life to YouTube. Tomorrow’s children, she claims, will have an all pervasive collection of images (currently still but increasingly moving à la Harry Potter) of their parents’ lives whereas she has just a single photograph of her parents together.

After reading two earlier stories based on research into archived correspondence—one on the forthcoming Official Biography of The Queen Mother which used correspondence as the main source material, and a second about how actress Vanessa Redgrave’s life almost took a very different path—it struck me that this notion of having a record of life is perhaps not so new after all, although the medium has changed from prose to digital visuals which makes for a very different kind of record. Our descendants will know much more about how things looked but how will they learn the story behind the photograph?

Fortunately letter writing has already made something of a comeback thanks to the convenience of email and combined with the ubiquity of digital cameras, a future generation of biographers should have a very rich library of material to draw upon. The weak spot is there are many threats to digital collections: corporate email retention policies which automatically expunge emails after a certain period of time, hard drive failure and theft are some of the most common, yet in many cases the (incomprehensible to those of us that value privacy) desire to publish this material can produce a useful safety net against digital loss.

This website moved tonight, seemingly without any disruption thanks to the awesome people at Retrosnub who are my new hosting provider. If you spot any problems, please let me know in usual way, or leave a comment below.

It was a lovely sunny day and there were some nice lilies in the flat:

This huge box arrived today from Dabs containing another box maybe a quarter of the size. What a waste. 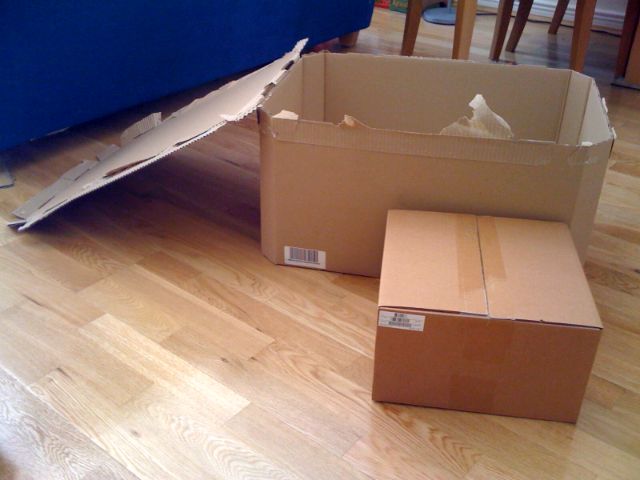 Lifehacker links to an article entitled, 100 Things to Do During a Money Free Weekend, but it’s really a great list of things to do at the weekend or during holidays at home.