After a day of mostly driving to transition from the West Coast to the Abel Tasman we decided to take a fairly leisurely approach and booked onto the 10:30am boat to the Abel Tasman National Park instead of the more keen 9am. The departure point in Kaiteriteri was 25 mins from our overnight park in Motueka which gave us a relaxed start to the day, and in fact we even arrived in time to have a coffee and muffin at a beachfront café, soak up the sunshine (it was almost t-shirt weather), and watch the world go by for a bit. 1 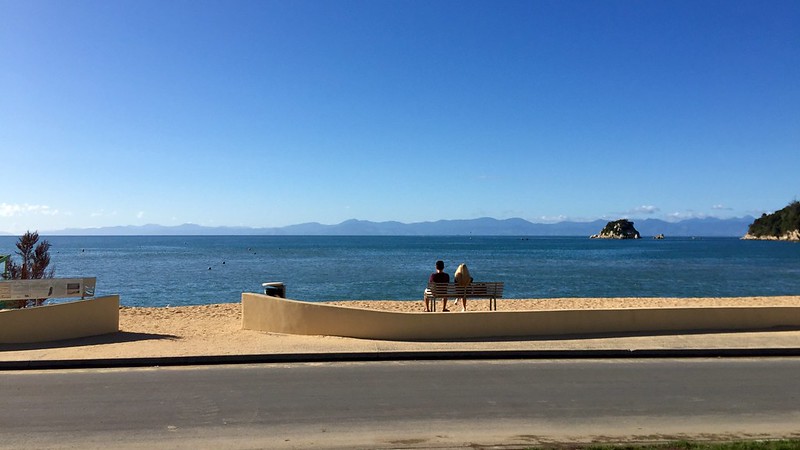 The receptionist at the campsite had recommended two options for us as being suitable for a baby. The first was to leave the boat at the first beach, Anchorage, and walk some loop trails, and the second to go all the way to Awaroa on the boat and then an easy two hour hike back to get picked up at Tonga Quarry beach. We chose the latter as it seemed to be the more active option and we were feeling that the activity to driving ratio in our holiday so far had not been as high as we wanted. This turned out to be a very good choice as we later saw that the beach at Anchorage was hosting a group of about 60 boisterous school children whereas at Awaroa only one other couple disembarked the boat with us and we practically had a long beach of golden sand to ourselves.

It took about 90 minutes to reach Awaroa. The sun was warm so there was no problem sitting out on the too deck taking photos the entire way. The scenery is fairly homogenous: turquoise blue water meets golden sandy beaches or rocky cliffs and then dark green native forest climbs rapidly up steep hillsides into deep blue sky. There were a few interesting rock formations to provide some visual focal points for the photographs but the highlight was watching some seal pups play and splash in the rock pool of one of the islands. It was blissfully relaxing sitting in the warm sun, being refreshed by the sea breeze, as we cruised along enjoying the scenery—plus someone else doing the “driving”.

We disembarked and picnicked at Awaroa. The temperature was just perfect, warm enough to sit in the sun on a handy drift wood log, but not so hot that I felt instinct to find shade. The beach was also mercifully and surprisingly free of sandflies—this day was going really well. The first part of our walk was down the beach, then we had to go inland through a forested section. This took about an hour and was not particularly interesting—there were no good views until just before the end, as we approached Onetahuti beach. Walking along Onetahuti beach was a great way of appreciating the picture postcard warm golden sand and clear blue waters again, although it was a bit busier than Awaroa, 20-odd people perhaps on a few hundred metres of sand! A short cliff top track within sight of the water took us round to Tonga Quarry beach for our pickup, and we had just enough time to cool our feet in the crisp, cold, clear water. The sand was unusual: it had a hard and “glassy” texture but felt great on our hard-walked feet and when I had to put my shoes back on it brushed off really easily and gently, no sandpaper effect!

The pick up was a few minutes early which was a little sad as we were enjoying a rest after our walk but the scenery on the trip back was still good. The final 45 minutes of the cruise were not so relaxing after we picked up the aforementioned party school children in high spirits fuelled by fresh air and sunshine. Fortunately we were able to recover from this with another coffee at the peaceful beach front café once we arrived back into Kaiteriteri.