Fiordland is a remote area in the South West corner of New Zealand’s South Island. It has high mountains and deep glacier-cut valleys which were subsequently flooded by the rise in sea levels at the end of the last ice-age. When they were first discovered by Europeans at the beginning of the 19th century they were assumed to be “Sounds” (valleys cut by rivers and flooded) as the Norwegian term “fjord” or “fiord” was unknown at that time. The most well known NZ fiord is “Milford Sound” since it is the only one accessible by road, but for this trip we decided to do something a little bit different and booked ourselves on an overnight cruise on Doubtful Sound.

END_OF_DOCUMENT_TOKEN_TO_BE_REPLACED

We arrived in Kaikoura at lunchtime on Saturday but sadly the conditions at sea were too rough to allow us to see, let alone swim with, any dolphins so we had to rebook for the following morning. Rosie loved it, but I am apparently not dolphin playmate material and they didn’t take much interest in me—I actually found watching their antics from the surface more interesting as these completely wild dolphins leapt from the water and did somersaults just for fun; under the water they just swam by me… Oh well, Rosie claims she made several dolphin friends so I think she enjoyed it enough for both of us. 🙂

After a couple of gentle days exploring Wellington’s excellent Te Papa museum and the Marlborough wine region, it was time to hit some more areas of amazing natural beauty.

First was a day hiking part of the Queen Charlotte Track. We started at Ship Cove, a picturesque spot which Captain Cook visited five times over the course of his three voyages to NZ. The area has never been farmed or forested so remains almost unchanged in appearance since Cook’s visit.

After five hours of walking through bush with fantastic views of the Queen Charlotte Sound (see photo), our return to Picton was via water taxi. This proved to be almost better than the walk as each of its three stops took us into another lush green bay lit up by sunshine sparkling off the clear water, and we even saw a pod of dusky dolphins playing in the sunshine! (Full photo album.)

Despite our long walk, the following morning we were due to be in Abel Tasman National Park so that evening we drove to Motueka. Abel Tasman is another coastal beauty spot, but unlike the QCT it has soft rock which leads to long golden sandy beaches and interesting rock formations around the headland.

Again we were taken out to one of the best bits of the park by watertaxi, but then our morning was spent sea kayaking–a good way to fully appreciate the coast line! We actually started the morning by kayaking off shore to a small island fur seal colony. This was unfortunately pretty dull, and the paddle back felt like a bit of a hard slog (especially when my paddling partner needed to rest every couple of strokes!) and I was glad when we pulled up onto a beach for lunch.

After lunch we set off for another walk through the bush. Unfortunately there were not quite enough viewpoints though and so we only caught fleeting glimpses of the sandy coves and turquoise lagoons below–we thought afterwards that perhaps a full day of kayaking would have been a better plan as in a way the QCT had been a more interesting walk, and also had fewer people and more birds, including some flightless Wekas which are unique to NZ! 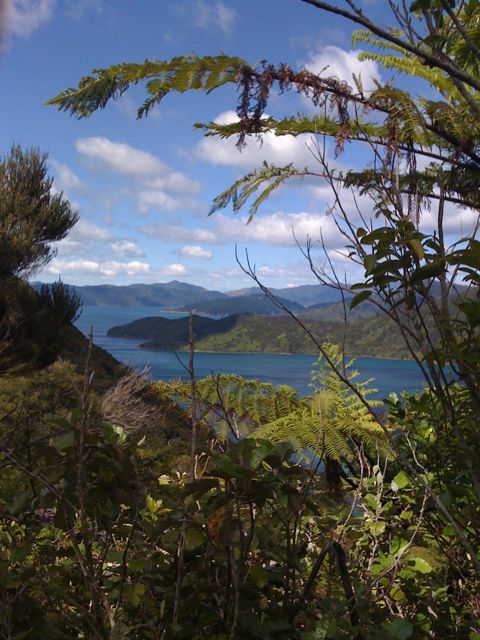 Today we took a break from our hectic schedule of adventuring to enjoy a more sedate kiwi experience: wine tasting.

We learned:
* 35 years ago the main industry in the area was sheep and fruit;
* the vines are extensively pruned to ensure very high quality (and this low grape yields);
* 85% of the wine is exported.

The last two explain why we found that even here, local wine cannot be purchased for under £8. In fact the reasonably priced wine here is the same as at home: Aussie and Chilean!

We visited five wineries, of which my favourite was “Spy Valley” (the name is due to the US listening post located in the same valley!) because as well as their cool name and morse code adorned labels, I really enjoyed all of their wines, from the sparkling white (codename “Echelon”) to the soft Merlot which is not easy to grow in this area but they produce anyway because the vinters are big Merlot fans themselves.

There must be something in the air down here as completely spontaneously, Rosie (who claims she doesn’t like heights) decided to jump out of a plane! Apparently she was overcome by the outstanding beauty of Lake Taupo on a gloriously sunny day…

Here’s a photo of her about to board the plane, she even came back in one piece!

The Tongariro Alpine crossing is claimed to be the best one-day hike in New Zealand, with spectacular scenery which was used as the backdrop to Mordor and Mount Doom in the Lord of the Rings films. However it seems that in New Zealand, beautiful scenery can only be properly enjoyed after a near-death experience (cf. the view as you float down in a parachute is fantastic, but first you have to do the free-fall!).
END_OF_DOCUMENT_TOKEN_TO_BE_REPLACED

After a brief trip north, we began our journey south on Wednesday through the rolling green hills of North Island—“it looks just like Yorkshire”, Rosie claimed. First stop was the village of Waitomo to do some black water rafting. Previously I had done the high-octane half-day trip but since we were short on time, this visit was more of a relaxed walk and float through the vast cathedral-like glowworm caves. Our guide gave an entertaining and detailed account of the biology of the glow worms and the geology of the caves, and even knew them well enough to guide us through the floating parts illuminated by only the light of the glow worms themselves which was amazing.

Later in the afternoon the Magic bus took us into Rotorua with just enough time for a quick dip in our hostel’s hot pool before changing and heading out to the Tamaki Maori village for a cultural evening. The Tamaki put on an impressive show of traditional song and dance, but unfortunately the educational part of the evening was rather short, and outside in the freezing cold, which meant I didn’t enjoy it as much as the Mitai cultural performance I attended last time. On the other hand, since this is the show promoted by the main backpacker tour operators, our table for dinner was mostly other backpackers and the company was good.

The next morning the bus driver gave us a quick tour of Rotorua which we would have otherwise missed. Because of all the geothermal springs, it seems it was originally founded as NZ’s first spa town and has some really attractive formal gardens and Edwardian buildings in a lake-side setting—a lovely place except for the constant and pungent sulphur smell. 🙁

Heading out of town we saw the Lady Knox Geyser and then Wai-o-tapu thermal wonderland. Previously I had found these rather dull and uninspiring, but coming from the north the weird landscape made a enjoyable and fascinating change from the green rolling hills which had become somewhat monotonous, and in the sunshine the greens, reds and pinks of the volcanic pools were vivid and shocking. I think it also helped that we limited ourselves to only the main 50 min walking track instead of attempting the full 75 min walk as it meant we escaped the sulphuric stench just as our stomaches began to rebel. After a “not as good as last time” experience the night before, it was great to find something I was glad to have re-visited!

When planning this, my second trip to New Zealand, I was keen to visit the areas which I had been forced (by time constraints) to miss out before, and “everything north of Auckland” was an obvious gap that needed to be addressed.

The Bay of Islands is in the enticingly named “Winterless North” (made even more so by the grey drizzle that welcomed us to Auckland), a half day’s drive north of Auckland. The main town, Pahia is a popular holiday spot, with a long, mostly sandy beach but the real attraction is the 100 or so islands with secluded coves and the dolphins which swim in the crystal clear waters. Due to bus timetables we were not able to stay long enough to spend a whole day cruising around the bay, so we opted for the “express tour”, NZ style—a high adrenaline tour of the bay at 40-45 knots in a open-topped catamaran with super-charged twin turbines and a skipper who liked to employ an “equal opportunity” policy of soaking of her passengers on both sides of the boat… The sun was shining, the islands were beautiful (a bit like the Whitsundays, but without the tropical vegetation and white sand, so greener) and it was great fun, even if the salt water did sting a bit! 🙂