Someone should rewrite the About JCN page to be:

“I was at the JCN BBQ. Incredible experience… I think they must be the only set of people who would have a barbeque with three computers, a webcam, a network connection and hub, and no means of lighting the barbeque… 🙂 So they all clustered round the computer trying to persuade it to install OS2 Warp (don’t ask), whilst one eminently practical person went off to Odbins to buy matches.” — rpc25

Earlier this week I attended the Editorial Board meeting of the IEEE’s first online-only magazine, DS Online.

This is the third year I have attended this annual meeting of editors and volunteers and as ever they were a fun and interesting group of people who are very committed to making this bleeding edge project a success for the IEEE Computer Society. As in my first two years, one of the most fascinating aspects is delving into the inner-workings of the IEEE and the IEEE-CS. Unfortunately as with any large organisation, achieving change, particularly technical change, seems to be something like a black art and it seems odd that something like an online-only magazine so bleeding edge for a computer society. Of course the part of the project that is really bleeding edge is the business model, not the technology, and as a result the technology that runs the site now seems a bit dated compared to the facilities offered by content management systems, and even blogging tools such as wordpress.

Overall, the editorial board were very enthusiastic about my ideas for the site, which included creating some RSS feeds for some of the content and allowing registered users to personalise their view of the site. The plan for discussion boards and allowing slashdot-style comments on stories seems to have disappeared though — people were much more worried about the need for moderating inappropriate (i.e. political) comments than I remember from previous meetings. I’ve never been convinced of the demand for these sorts of services from the IEEE anyway — the sort of content it publishes just doesn’t endear the same sort of debate as the typical slashdot story!

Anyway, how successful I can be at driving major technical change at an organisation as monolithic and remote as the IEEE-CS remains to be seen, but wish me luck!!

After what seems like months of waiting, a usable version of rhythmbox is finally in Debian sarge. 🙂 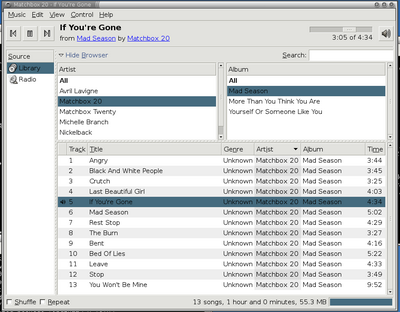 One problem I did have with it is that it uses gstreamer0.8 which at present can only be configured via gconf-editor — confusingly the gstreamer-properties command would only configure version 0.6 as I now appear to have two versions of gstreamer installed on my system. Anyway, I fired up gconf-editor, went to system / gstreamer / 0.8 / default, changed the value for audiosink to esdsink and all now works nicely.

So while I was reviewing my old website content I (re)discovered this collection of very bad borg jokes. Some of them are still quite funny so I thought I would post them again. Note: I take no credit (or perhaps, blame!) for these as they were all collected from the web many, many moons ago.

So, this weekend I finally got round to redesigning my website. I’ve published “news items” at the top of my homepage for a while now (exam term 2000, to be precise!) and so thought it would be nice to play with some proper weblog software. I chose wordpress as that seemed to be one of the most popular with my blogging friends and it is free, as in speech, not beer, unlike many of the other most popular blog tools. So far I’ve been very pleased with my choice — many thanks to all the WP developers out there.

Most of the content from my old website can be found in the menu bar to the right and I have also preserved my old news items. Most of the early ones do appear to have been written at about 2am in the morning, but they brought back some good memories for me.

New photos in the gallery, including Jenny and Anthony’s wedding, the Oxford-Cambridge boat race and my travels to Belgium and Prague.